Trends in India and genetic background

India ranks high in the list of developing countries with the greatest number of people affected with diabetes. Estimates from the World Diabetes Atlas and the WHO records place India in the top ten countries in the world with the highest burden of type 2 diabetes mellitus.
Type 2 diabetes is a "multifactorial" disorder, which means that a complex interplay between genetic and environmental factors underlies the etiology of this condition. Individuals clinically diagnosed with type 2 diabetes complain of a lifelong burden in terms of daily medications, associated liver and kidney complications and dietary restrictions. There is no proven cure for type 2 diabetes, only "management". Since a majority of type 2 diabetes symptoms can be managed through epigenetic intervention, physicians have started calling it a "lifestyle syndrome".

Why genetic screening is useful

Type 2 diabetes is caused by impaired insulin secretion by the beta islet cells of the pancreas. Insulin is a very important hormone for metabolic function and is a key component of glucose "homeostasis" (state of balance). While investigating the mechanisms behind type 2 diabetes development and physiology, scientists have discovered at least 20 important loci (gene locations) linked to insulin function/insulin sensitivity.
Single base variations in the sequence of these genes, called Single Nucleotide Polymorphisms (SNPs, pronounced "snips") increase an individual's risk for developing type 2 diabetes. Screening for all known variations is an uphill task and reduces accuracy. However, large-scale population studies in Indians and Caucasians have successfully elucidated reliable results to help narrow down causal variants which will provide accurate risk scores, while predicting. 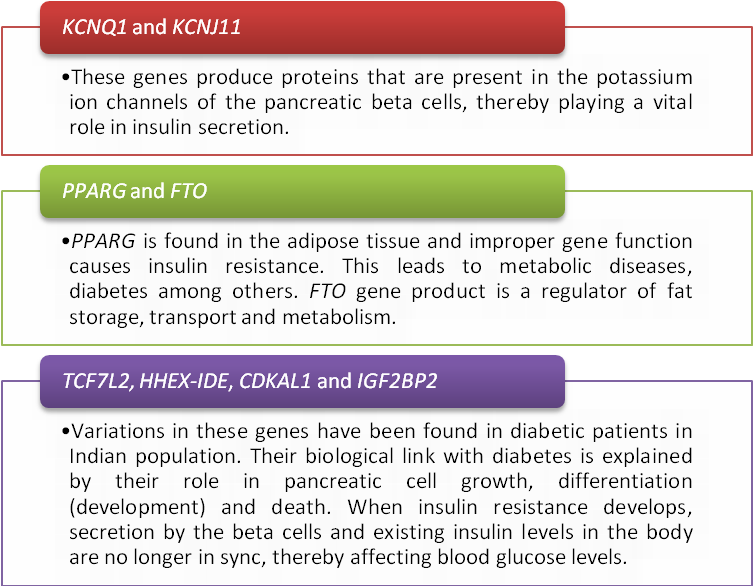 Scientific findings from type 2 diabetes-based studies have shown to be consistent across different races and ethnicities, for the genes mentioned above. A screening procedure that analyzes variations in these loci is useful to identify high-risk individuals, to facilitate early intervention and/or delay onset.